Home office with children? The main advice of the four professionals is to calm the anxiety of all mothers 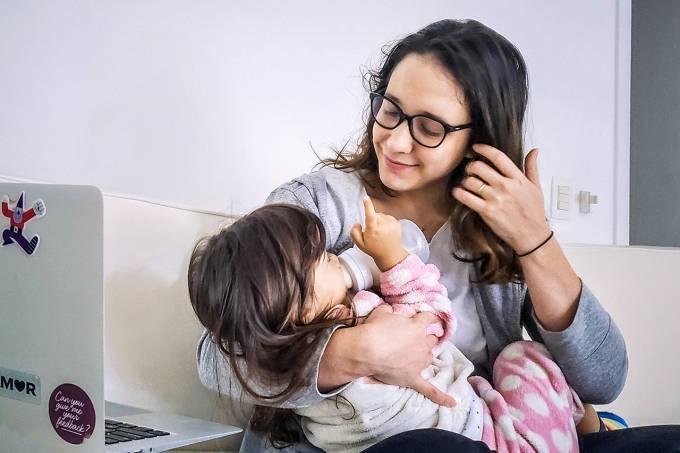 “Home office with a child is not really a home office. It’s school, design, chores… it’s all office ”, says Paula Rothman, content manager of the Nubank blog, and mother of Malu, 2 years old.

She, her husband and daughter have been at home for almost two months in São Paulo, following the quarantine recommendations because of the coronavirus pandemic.

Like many Brazilian mothers, Paula was challenged to restructure her routine to adapt to the new context of social isolation and balance her role as a mother and as a professional.

On this Mother’s Day, Paula and three other mothers working remotely with their children’s company will share tips they learned from this experience.

However, Denise Door, marketing director at Amaro and mother of Luca, 5 years old, and Daniel, 3 years old, warns that there is no single solution that works for all mothers.

“Honestly, I don’t know who has the best way to make it work, it depends a lot on each family and each routine. Certainly, the privilege of being able to do home office helps. There are women who need to be away from home to work, so it is much more complicated ”, she says.

And in times full of insecurity and fear for the family’s health, Juliana Lima, Trade Marketing analyst at Royal Canin, a Mars brand, and mother of Alice, 4, asks that women do not forget to take care of themselves.

“At this point, taking care of our psychological and emotional is also important. We are all confused and very insecure. I am lucky to work in a place that allows me to protect myself and my daughter, ”she says.

According to a survey by Catho, a job classifieds website, 60% of mothers said they felt the impact of social isolation on their emotional health. Among the greatest difficulties pointed out in the research, it appears to deal with isolation and mental health (42.5%) and to reconcile domestic tasks, work and children (40.5%).

For the three of them and also for Rubia Cardoso, Operations Manager at PicPay, Heitor’s mother, 5 years old, the biggest tip and the message they leave for all mothers at this moment is: try to charge yourself less during this period to be perfect.

“Be patient and remember that it is not only difficult for mothers, but for children as well. In the beginning, I lost a lot of patience to make my son study. At the end of the day, he is also tired and unable to leave. Last week, for two days I couldn’t get him to attend classes. Okay, I took Sunday off to do school activities. Try to adjust your time, do not charge yourself and do not stress the child ”, recommends Rubia.

Check out what the four told EXAME:

Early in the quarantine, in March, Paula talked to her husband to establish what was a priority for them at that time. They decided that it should be health and that they would not do anything to put that at risk.

“It already takes the weight off a little. I wondered if I couldn’t ask for help from a relative, but it’s not recommended. So, knowing that there is nothing else I could do, we defined what would be possible ”, she says.

For her, this meant establishing a routine with her husband in which her work schedules revolved around her daughter’s needs.

“In the midst of‘ non-routine ’we combine our appointments thinking about the time she wakes up, when she takes a nap and meals. We take turns in the morning and in the afternoon when a two needs to be 100% with her, without calls or meetings ”, she says.

At the other end, with her team, Paula made improvements in communication and started to delegate more tasks. She organizes her list of responsibilities according to the delivery priority, so as not to delay or hold on to decisions that depend on her.

“We are afraid to share things and we don’t want to be seen asking for help. At Nubank, we have a culture of doing a lot together, but it is a challenge for mothers and women to ask for help. I think a tip is for everyone to try to talk to other people, other mothers, fathers, colleagues at the company and friends, about what is going on. The whole world is experiencing a pandemic, it is rare that we can say that. And you don’t have to apologize for being a mother, ”she says.

Heitor, 5, is the son of Rubia Cardoso, Operations Manager at PicPay, and is making art on the table while his mother works (Personal Archive / Disclosure)

For Rubia, it is very challenging to reconcile her son’s online classes with her work schedules, but she soon established a routine for herself and put “sacred” schedules that she reserves for Hector, especially lunch.

She takes advantage of his passion for art, giving all the materials for him to unleash his creativity, to have moments of calm and dedicate himself to the service of the company.

Before the quarantine, Heitor was already familiar with his mother’s work, who took him to visit PicPay’s office in Vitória a few times. Now, he is always present at company meetings.

“Turn and move, he comes behind the camera and participates in the meeting. He naturally appeared. He understands the moment that we are going through, that he cannot go out on the street and that I am working. Still, he is a child and sometimes calls for attention. He says: ‘Mom, enough, this is the last meeting for today’. When I stop, my attention is totally on him. We already had a pajama party and a picnic in the living room ”, she says.

By including her son and being transparent with her team about times that are exclusive to him, she paves the way for her team and colleagues in the company to also share her personal difficulties.

“At first, it even bothered me if he was going to disturb the meeting, but everyone was very receptive. In the first meeting of the week, we started with 10 minutes for people to talk about the weekend, there is an open space for people to take a position and share their feelings ”, she said.

Alice, 4 years old, working alongside her mother, Juliana Lima, who is a Trade Marketing analyst at Royal Canin, at Mars (Personal file / Disclosure)

Since March, Juliana’s routine has changed completely: in the area of ​​trade marketing, she was responsible for organizing internal and external events at Royal Canin and was always traveling for work. If his motivation was constant contact with new people, it was difficult to adapt to the isolation. But she doesn’t complain about the extra time she got with her daughter Alice.

“She was used to travel. I never lied to her, I think it’s important to give her this vision of work. At school, they explained that classes were going to stop because of the pandemic and I said I was going to start working at home. Still, the first few days were confusing. She understood that the mother at home meant the weekend off, when I am available to play with her. It took her a week to understand that being at home could also mean work, ”says Juliana.

For her, lunch time and school activities are entirely Alice’s. And she tries to involve her daughter in the routine of responsibilities. “I call her to cook with me and wash the dishes. She makes a huge mess, but she has fun and likes to be together ”.

Juliana says that the company’s position during the pandemic helped a lot to lift a heavy weight off her back. According to her, it was clearly communicated to everyone that the moment was atypical and that they would not be measuring the performance of each one.

“The board made it very clear. My manager has big kids already and I never feel any judgment when a meeting is interrupted by my daughter. They told us that the main thing is our security. I feel seen, I feel that my first role is as a human being and as a mother. Right now, we are in no condition for perfection. You don’t have to be the best mother, the best professional and the best housewife ”. 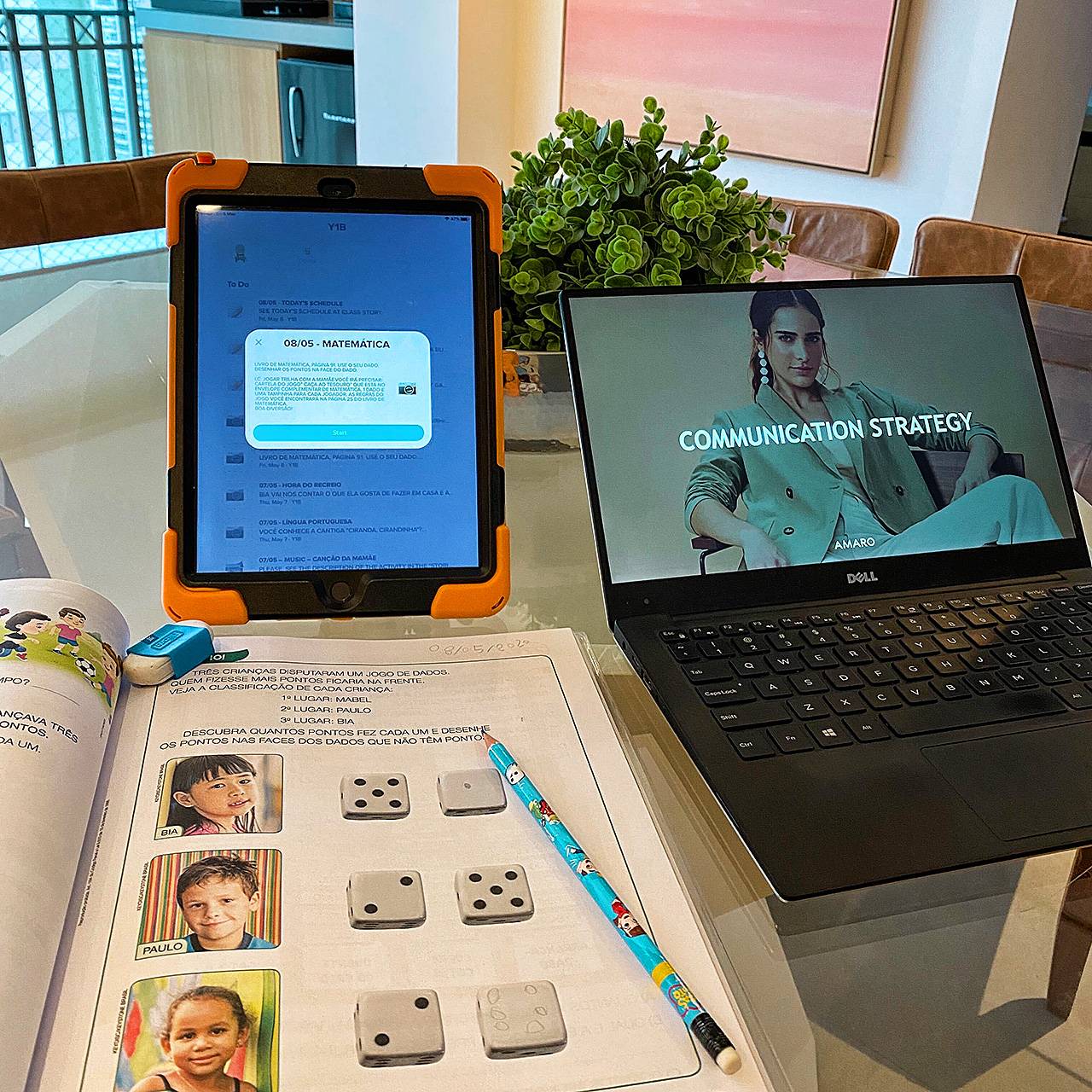 The home office of Denise Door, marketing director of Amaro and mother of Luca, 5 years old, and Daniel, 3 years old, is like this: math class together with work (Personal file / Disclosure)

“I joined Amaro two years ago and have always worked in the office, I love the home office, but… doing a home office, with the husband and two children, this is different from the real home office. Everything changed. The boys stopped going to school. And obviously we also don’t ask the nanny to come, everyone has the right to take care of themselves ”, says Denise.

She believes there is no better way to make everything work, but she has found a balance with her family. At the beginning of the week, she closes her schedule, work and children, with the most important meetings and tasks of the service and the blocked hours for Luca and Daniel.

Luca, 5, is in the literacy process, so she and her husband share the classes that need to accompany him to ensure he is doing the activities. With the youngest, who is still in early childhood education, they are more flexible. “If he doesn’t want to go to class, that’s okay. If he is learning colors, we teach with a joke ”.

They try to normalize life with little things, like bedtime and meals. With the division of time between the couple, the closed office door became a signal: if one of them is inside, he is working; if it’s out, it’s just them.

“Of course, sometimes one of them opens the door and says: ‘the time is up, time to play,” says Denise.

She also believes that nothing needs to be perfect now. And that the difficult time can become lighter when you focus on positive things: they are spending more time with their children, attending school and teaching them to have responsibilities at home.

“But it is far from perfect. And that’s fine. They are watching more television than I would like, eating more of the same food. It’s okay to eat more nuggets. You have to give up some things and be okay with that. This is one of the main things: understanding that everything is different at the moment and it is okay to do things as you can ”.